That forest is an important resource in connection with our problem is undoubtedly undisputed. Studies by ETH Zurich see afforestation as the most effective remedy for climate heating. But it will probably take a while before the trees can start cleaning the air. Nevertheless, I assume that the printed paper gets into action as quickly as possible. 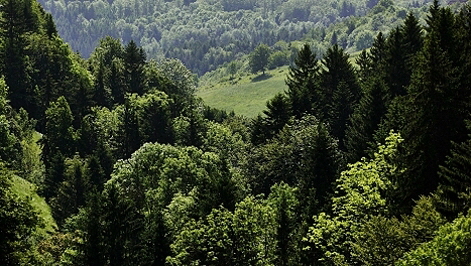 Water: Furthermore, there is a very disturbing water problem, which we must necessarily solve. The higher temperatures stimulate the evaporation and the groundwater levels fall everywhere in the world, the must be counteracted quickly and effectively.
So we need these desalination plants.

I think we agree that we have quickly to reduce CO² emissions and quickly too removing excess CO² from the air.

Another approach to reduce CO²

That's why Canada and Switzerland are researching a method to make this possible. The Canadian company Carbon Engineering goes even further and wants to produce synthetic fuel from the filtered CO² in combination with hydrogen from water. Again a lot of water is needed and of course a lot of solar energy. So everything is always about water and solar energy. Of course, there is something in the idea. If we put these power statios where none wants to live, at best at the best point between water and energy production, we are able to solve our problem well in the medium term. The only question is if we get all the quantities. Serious calculations have to be made.

As I said: USA, Mexico, South America, Peru, Chile above all, Argentina and Brazil, then half Africa, South Africa, Saudi Arabia and the whole surrounding region, further Iran, Afghanistan down to China. Australia is a bit out of the way, but could be at least completely self-sufficient. A truly world-encompassing belt that ensures energy production almost around the clock. If we could make solar power plants swim, we would be Sunline around the clock. Of course, we need world peace and genuine international cooperation and we need seriousness,  with such a bad financial system we will not be able to convince for example the Arabs or me. Earth is not a fun playground of self-congratulation but a place to live.

It looks a little like a perpetual motion machine 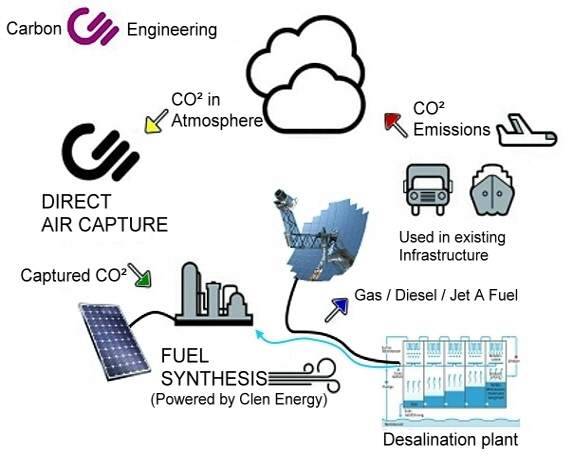 It becomes clear at first glance: If it really works, a lot more CO² has to be extracted from the air than is subsequently generated again. Because we have too much CO². So it is about quantities that you can not calculate in the head so easily. It will not go without a change in the vehicles, ships and aircraft, so a significant reduction in CO² emissions. But it seems to me a good interim solution, at least until the planted trees are big enough to be able to break down CO².

Still burning heavy diesel I think is nonsense, and also air planes should no longer fly with nozzle drive. Because they also emit heat and they make a lot of noise. With quiet airships, I think it would be all much more served and travelling would be much more comfortable. After all, we already have enough psychologically ill people through all the stress that our economic system generates and it becomes, as statistics show more and more...

It is already clear what is intended here. CO² capturing and the syntetisation of it are financed by various oil companies, because they would like to stay in business. But if, on the one hand, the ecological or sustainable products are introduced, production will inevitably decline considerably. If we go a step further and have the same financial, social conditions, equal wages in all countries, then production in other countries is no longer worthwhile. The transport of goods will then decline sharply. Incidentally, these measures are the most effective in the fight against all environmental pollution, not just against CO².