In 2016, Israel will cover more than half of its national water needs with a water treatment plant.

Afforestation of 900 million hectares of forest could swallow two thirds of CO² emissions. This message comes from Jean- Francois Bastin of the ETH Zurich and his colleagues 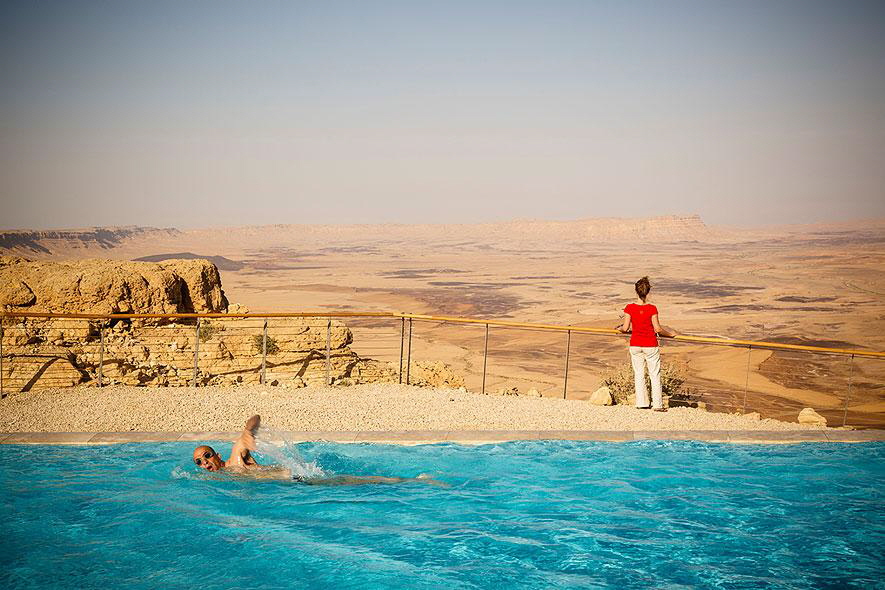 A hotel pool in Mitzpe Ramon, in the middle of the Negev desert. With new technologies, Israel can now cover a large part of its water needs even in times of drought. Source: GEO online

Afforestation without water not possible

But he has made the bill without the host. There is a shortage of water everywhere, and the groundwater level is constantly falling. So first of all, we need utopian amounts of water. Just to protect the existing forests, we need more water, more than we have at the moment. Gigantic investments are needed to realize this, investments that will not yield big returns. In the US, huge tracts of land are broke because water is missing. In Chile, the groundwater is withdrawn from the poor farmers through gigantic avocado plantations, and about 21,000 tons of lithium are produced in Chile.The lithium production requires gigantic amounts of groundwater, alone in one location up to 21 million liters daily. Chile is becoming a desert. All over the world, water evaporates from the human made artificial warming of the atmosphere. The groundwater levels fall daily. Under these circumstances, it is impossible to grow large areas. Also, food production will soon reach its limits. In Germany, one of the most water-rich countries in the world, the fields dry up and in summer the water level in the rivers sinks so low that shipping is hardly possible any more. What Brazil is up to do now is sheer madness. Primeval forests grow on a thin layer of humus, below that there is only sand. For the cultivation of crops and animal husbandry, very large amounts of water are needed, but Brazil will not have it without the rainforest. So Brazil will first be a steppe and then become a desert.

It works only with a lot of desalination plants, a gigantic world water network, indescribable investments with less returns

So we have to build desalination plants, get the water out of the seas and bring them to the fields and forests before we indulge in any fantasies. Studies are made quickly. Easily earned money that governments like to pay to reassure the people. But this is not a solution but should only helpthe politicians to finnish their term without bigger trouble.

There is another aspect: to fill up groundwater and, also to the deserts, back up forest, presumably leads to strong cloud formation, which could quickly cool the earth down again to a global average temperature of 20-25 ° C.

But: There are several problems with the facilities. Read below what it is about and how it can be avoided

The largest seawater desalination plants are located in dry regions such as Israel, the United Arab Emirates, North Africa, Morocco, Spain and North America, specifically in 177 countries around the world. In 15 906 desalination plants, 95 million cubic meters of fresh water are produced every day, but unfortunately also 142 million cubic meters of brine. This concentrated brine contains not only salt but also chemicals and dissolved metals such as: magnesium, sodium, calcium, potassium, bromine, copper, chlorine and lithium, which have been shown to cause cancer and can damage the genome. These substances are intended to prevent plant clogging. Instead of recycling this dangerous soup, which would be possible without further ado, the brine is usually pumped back into the sea and considerably damages the sea creatures living there. In addition, these substances, especially the dangerous heavy metals, end up in our food chain.

Also the dumping in deep wells or final storage after drying, in underground storages is of course not a permanent solution. The health risks also exist here. 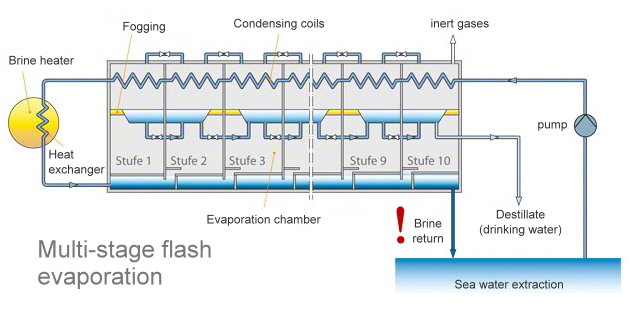 The preparation of the brine is possible and urgently necessary

It is entirely possible to develop and apply better treatment methods for these residues. They could be brought out and used again. However, this would reduce the operators' profits, which is why they are usually not used. Here, too, the so-called economy comes before the environment and health protection. According to the German Basic Law, at least all of these procedures would be strictly prohibited. The technology of processing has not yet been fully developed and recovery is not competitive. But if you calculate the follow-up costs, for the sloppy handling of the remains of a production, as has always been done in capitalism, we come to a very negative balance.

Here, too, I would like to consider that, due to the so-called economic efficiency, we are all in exactly the place where we are, namely on the verge of an ecological collapse, and we would have given up ours from the start Simply dumping dirt into the environment and simply blowing our exhaust gases into the air, cutting everything down and looting it, yes, then we would not need any desalination plants at all. But now they are necessary and we should, at least now, understand that the “economic viability of so-called competitiveness” was a very expensive and stupid undertaking, and the costs have only been shifted exponentially, expanding into the future, and still are will.

There are also other ways to walk with the brine

A completely different process is used here which does not require any chemicals and / or metals. The seawater is pre-filtered and desalination is carried out via evaporator pipes in a steam compression room. The water quality is excellent and can be used to produce drinking water. The best thing about it is that the clean brine can be used medically in brine baths or over salt pans for the production of table salt.

This new procedure is funded by the Federal Ministry of Education, Science, Research and Technology (BMBF) and the Ministry of Economy and Affairs of the European Union, Mecklenburg-Western Pomerania. 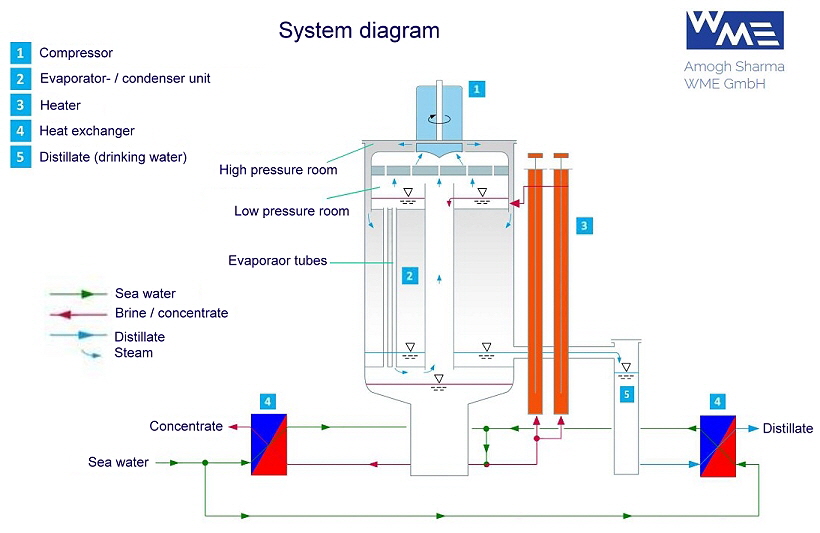 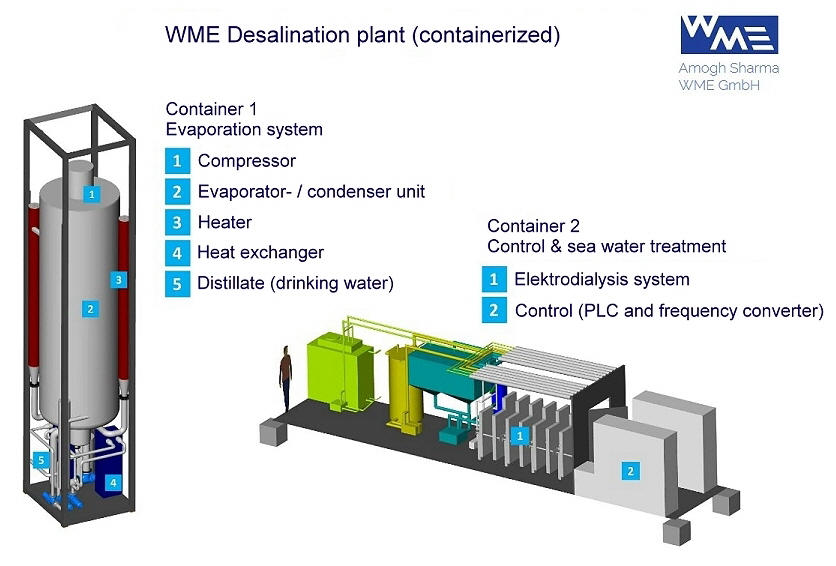 Under the link opposite: https://www.wmea.eu/ you can get an idea of the advantages. The systems are still comparatively small and could, I think, be quickly planned and built on a larger scale. 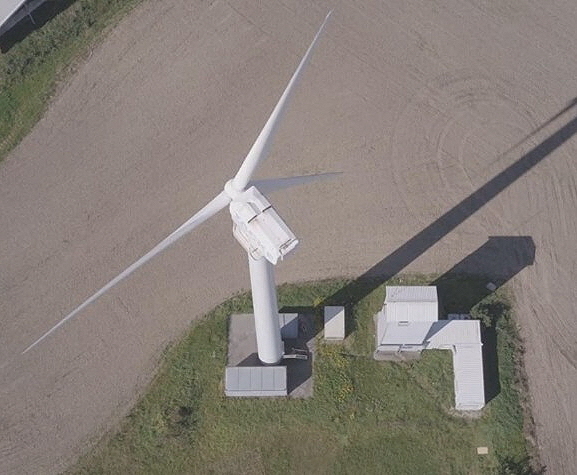 
Instead of pumping billiards of money into a dilapidated mass production economy or putting billions of dollars into research power plants (fusion reactors) that will never provide energy, one should invest more in such plants, in practicable techniques to deal with the upcoming environmental problems.